The credit card processing industry is notorious for complexity, hidden fees, not-so-great providers, and generally considered by many to be one of the most challenging parts of running a business, and rightfully so. Buying credit card processing is like getting your car repaired in that consumers usually do not know enough about what they're buying to ensure that they're being treated fairly. Sellers end up having a significant knowledge advantage over their customers and can hide fees, overcharge for the service, or charge them for things that are unnecessary.

The rub for me has always been that the overwhelming majority of all merchant service providers don't play by the rules and capitalize on the industry's complexity for their own benefit. By "rules", I simply mean shooting straight with buyers. Some providers of course are more egregious law breakers than others. Despite being rule breakers, these companies are often rewarded because they win the business of even astute buyers over other companies who refuse to use the same sneaky tricks.

QuickBooks Merchant Services and Costco Wholesale are two great examples of 'Rule Breakers'. I could have chosen any number of companies as my examples but I wanted to demonstrate that even the largest players, with the greatest amount of perceived 'trust' are using the same sneaky tactics as everyone else. Let's look at QuickBooks first. Here is the screen shot for their main merchant services web page. I've highlighted the area in red where they show their rates: 1.72% for swiped and 2.44% for key entered. Fair enough, competitive rates. But.. 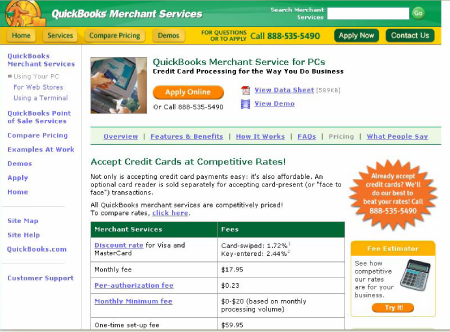 If you look down in the fine print you'll see that some Non Qualified Transactions will be charged 3.27%. That's a significant bump from the advertised rates. That's important to know because depending on a few variables, anywhere from 50% to 80% of your transactions are going to be Non Qualified and fall into the 3.27% rate category. The actual split will depend on how a provider has structured each bucket but the aforementioned ranges are good estimates. As a consumer, I need to know about this 'minor' detail.

But let's say that you didn't read the fine print and then clicked on the "Try it!" button on the side to see just how much you should budget to pay for credit card transactions. What comes up is a comparison with only the 2.44% rate represented. The 3.27% rate for "Non Qualified Transactions" is nowhere in sight. So now they've provided two data points to demonstrate to you that you should expect QuickBooks Merchant Services to charge you 2.44% on your credit card transactions. That's simply not the case.

Finally, after not being upfront with their own fees, they make a disingenuous gesture and try to become your caretaker by announcing: 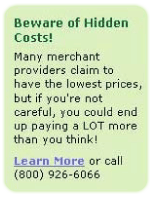 Now let's take a look at Costco; they're worse than QuickBooks. If you look at their website, they offer merchants a swiped rate of 1.64% and $0.20 and 1.99% and $0.27 for internet or mail order transactions. Nowhere on their website do they disclose that Non Qualified cards are charged 3.47% and $0.31. You have to pick up the phone and speak to a sales person before you can squeeze this minor detail out of them.

A few things about this:

Summary The problem I have with every provider who is selling this way is that it's underhanded. These are the same selling tactics that have been used in the mortgage and title business and what ultimately got Congress to start regulating those industries.

Companies who use these strategies bet that even though customers will become irritated when they find out the reality, they'll stick around to avoid the cost and effort of switching to another provider, who will probably just be the same. It's certainly a way to play the game, but definitely not one that I could ever be proud of.

***
Braintree We enable beautiful commerce experiences so that people and ideas can flourish. More posts by this author

Stay up to date – subscribe to our RSS feed